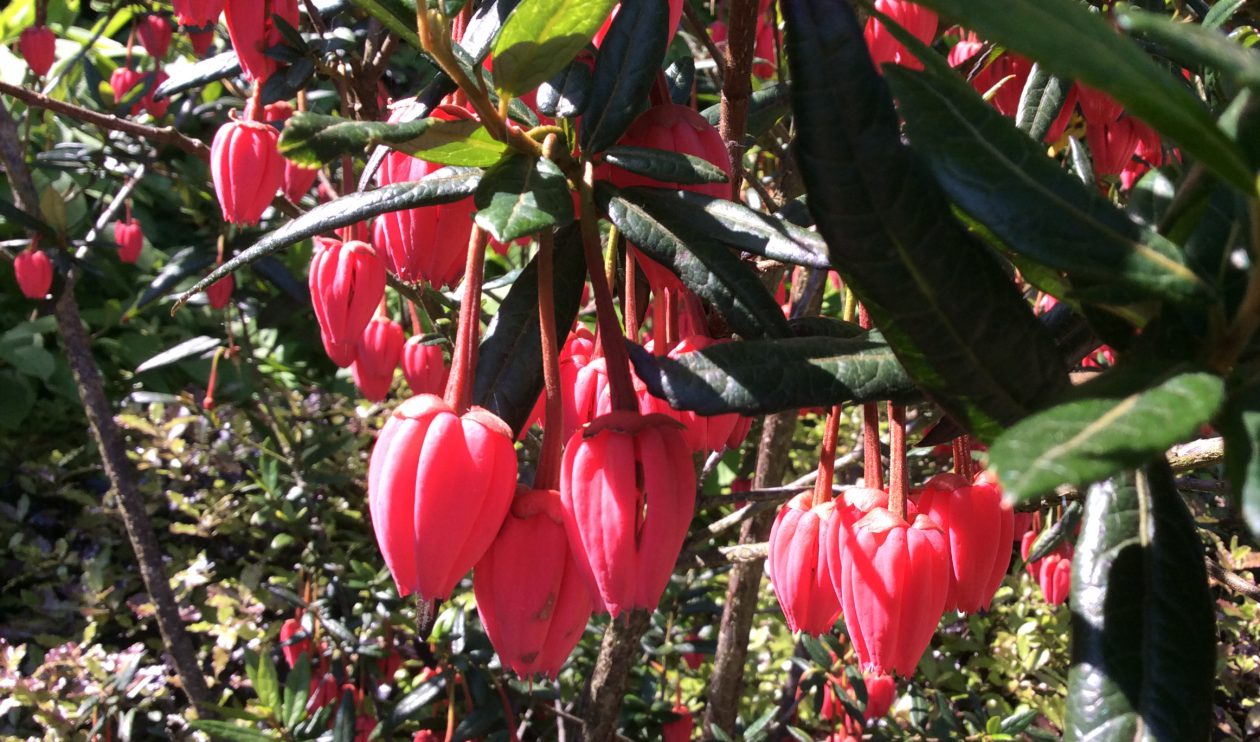 We are well into June – so this is a bit of a retrospective – in fact exactly a month ago today! – but as with all walks in the company of Terry Davies and Malcolm Fraser, their annual Tree Walks are very memorable and should  be compulsory in everybody’s diary!

Having spent the week prior to this immersed in my daughter’s offer of a permanent job in Hong Kong it was appropriate that Asia featured highly on the agenda.

It was a chance to de-stress with these two horticultural therapists whose in depth knowledge of trees and shrubs in Roath Park’s botanic gardens is both stimulating and soothing.

Running late as usual I caught up with them standing in the sunshine pointing out the aptly named Chilean Lantern tree from South America. Its’ beautiful perfectly formed red lantern-like flowers are bountiful and you immediately feel a sense of satisfaction at the privilege of seeing it in all its beauty hidden away in the borders opposite the cherries and rose garden.

Its’ neighbour, dressed in another bright primary colour – is the yellow-flowered Barberry from Turkey – a country which straddles the continents of Europe and Asia.

Alleged to have come from Judea in Asia minor is a tall willowy Judas tree covered in bright pink. With its perfectly formed heart shape leaves it is not surprising that it is also known as a Love’ tree. 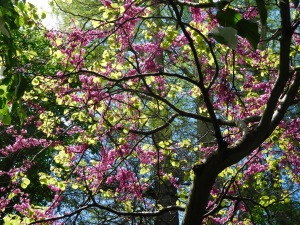 Some say its’ name ‘Judas tree’ derives from the myth that it was the tree from which judas iscariot hanged himself.

Looking very cool in the background nearby and coming from from cooler central China is a large leaved architectural plant called the Loquat. It fills a space in the border quite unobtrusively. It has white flowers in late Summer and would normally fruit later in the year but not in this country.

The leaves are about a foot long and a gorgeous rich dark green with a white slightly furry underside.

Turning to walk alongside the borders of the rose garden we pass 50 year old bushes with their roots surfacing in the poor soil. Andy and Anne Bell’s website is such a treat – read here about the –  Rose Garden history with photos

My favourite roses are two red climbers – Ena Harkness & Dublin Bay, both of which are at the far end of the rose garden.

Moving further along the border is another thorny plant –  a hardy spiky shrub from Uraguay and Brazil, called Colletia Paradoxa Which is alsoknown by the descriptive names of ‘crucifixian thorn’ And ‘jet plane ‘ plant!

We learn that they grow strongly and are never damaged by frost. Their white flowers in September and October are strongly scented and are useful for insect pollinators.

Within sight of this rare ‘leave me alone’ type of plant is the beautiful feathery ‘look at me’ pink of the Tamarisk Tree from North Africa- it is gales resistant and often found near the seashore as it can be used to stabilise sand dunes, enjoying a high salt content soil. 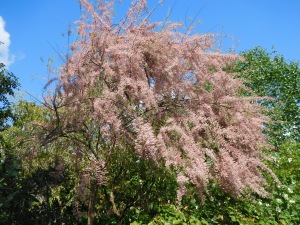 It is a lot to take in and Terry speeds up the process by mentioning  three trees in one breath….the first is the from Asia –  the white Himalayan Birch from China standing next to two trees from the USA – the Kentucky Coffee Tree and the large leavedMagnolia Maceophylla  which can have leaves of up to 3 feet long and white flowers up to 14 inches across.

Further along on the corner is the Kaki tree – also known as the Chinese ( or Japanese) persimmon. It is native to China, Burma and India and this particular tree was planted in memory of the Italian Head Gardener of Roath Park – Giovanni. Terry remembers him well and his stories of his home town near Naples. He used to enjoy relating the tradition of how when someone got married in Italy two trees would be planted either side of the new couple’s home – a peach and a persimmon. He loved eating the orangey fruit which were always best when allowed to riped fully on a warm windowsill. They are quite astringent and not to everyone’s taste. The trade name for the non-astringent variety is sharon fruit.

The beds near the rose garden really should be named Magnolia Heaven as including the champion tree –  the Magnolia  Virginiana (also known as Sweetbay Magnolia) from North America  – which flowers May to June followed by a fruit which ripens to show bright red seeds which lasts until February, there is a vast array of different other types.

The Friends of Roath Park facebook page – fRiends of Roath Park has a picture of the Magnolia Denudata – or Lily Tree in all its’ March glory. Its’ flowers were regarded as a symbol of purity in the Chinese Tang Dynasty. It was planted in the grounds of the Emperor’s palace and is the official flower of Shanghai.

Another tree nearby is the Magnolia Acuminata  from the USA which is also known as the Cucumber Tree due to the shape of its fruit.

So onwards and with leaves similar to a Mountain Ash, the Yellowhorn is  a very attractive bush, or small tree. It bears sprays of elegant white flowers on bare branches in May or June.

Reading more about this plant from the Kew website it says how the director at Kew in 1897 described it as Xanthoceras sorbifolium ‘…one of the most attractive and interesting hardy garden shrubs that has been introduced for many years’. It was originally collected near Beijing in about 1830 by the botanist Alexander von Bunge (1803–1890), when he was accompanying an overland mission to the capital from St Petersburg. It was brought into cultivation in Europe in 1868, when the botanist and missionary Père David (1826–1900) sent seeds and live plants to the Jardin des Plante, which is the main botanical garden in France.Roath Botanic Gardens  isn’t quite the 28 hectares of the French gardens but in such a small space you get a real taste of World nature.
51.495201 -3.157938
Advertisement