Spending a morning in Kowloon’s city centre park introduced me to a wealth of beautiful trees, shrubs, birds and butterflies.

The Sunshine Tree ( Cassia surattensis) or ‘scrambled egg tree’ as it is also known is a beautiful evergreen tree with flowers every month of the year. There are around 500 species of cassia trees and they are renowned for their bright yellow blooms.  Another cassia – The Golden Shower tree ( cassia fistula) contains the national flower of Thailand. I recognise the word ‘cassia’ as I recently hunted down cassia bark in my local spice shop which is a cinnamon substitute I use in making indian curry. The trees are part of the Legume family and appropriately I have read that the flowers are often eaten as vegetables by Indian hill tribes.

The leaves closing at night – said to reduce water and energy loss – is appropriate as they wake up to the glorious Summer sunshine in Hong Kong.

The Incense Tree ( Aquilaria sinensis) in the second photo above, is marked with a tag saying ‘an old and valuable tree.’ I have learned that they used  to be prolific here as Hong Kong or ‘Fragrant Harbour’ was named after its incense trees. They are aptly named as they were ( still are) prized for their resin contained within their agarwood bark. The resin was originally used in Chinese medicine as a good painkiller. These days, often referred to as ‘liquid gold’ the now rare resin is highly prized and distilled to make oud oil which is an essential ingredient of the most expensive perfumes.

The beautiful fragrant deep pink orchid (bahunia blakeana) of this tree also caught my eye in the park. Walking through the streets of Hong Kong you see the symbol of the orchid everywhere. It is the flower emblem of Hong Kong and first appeared on the Hong Kong coat of arms, flag and coins after the handover from the British to the Chinese at midnight on July 1st 1997 – 20 years ago.

I recently visited this square where the handover ceremony took place.  The giant orchid sculpture glistens with pride.


The flower was named after a Hong Kong governor – Henry Blake, a keen botanist. The fact that this flower is unique to Hong Kong, being originally discovered here seems very appropriate. The harmonic red and white design on the flag symbolises ‘one country, two systems’ and I certainly feel the warmth and harmony between the British and Chinese here. Just walking through the park people smile and are friendly to each other. Apart from the current lovely weather it does almost feel home from home.
Advertisement

Estrella Park (Jardim da Estrela) in Portugal is magical. In central Lisbon it could easily be bypassed as it isn’t heavily advertised and is on the Western route taken by tram 28 rather than the more touristy Eastern ascending route to the cobbled hills of Alfama.
Stepping off the tram at the end of the line outside basilica Estrella the wrought iron entrances to the park opposite are camouflaged a little by the yellow miniature tram-shaped coffee hut.

I cross the road leaving the basilica area – crowded with funeral mourners and Funeral directors carrying large halos of fresh flowers from the four by four polished black hearse.

It is midday and on this beautiful sunny lunchtime I join the locals as they stroll through the green oasis of park with its’ palms, olive trees and magnificent banyans.

The banyan tree – the national tree of India – gives welcome shade. Apparently the Portugese adopted the word ‘banya’ from Gugerati when referring to the Hindu merchants who would gather to do business beneath it and so the tree gained its’ name.

To Hindus the banyan is ‘the wish-fulfilling tree’. They are long-living and in mythology are seen as representing eternal life.

It is strange to see their aerial roots hanging down from the branches. They will form trunks in the ground and can spread to 200 metres in diameter and 30 metres in height.

The banyan features at the top right corner on the coat of arms of Indonesia,, symbolising the unity of Indonesia – one country with many far-flung roots. 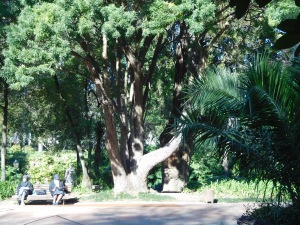 Sculptures blend happily into their surroundings.

And flying high above the pines are bright green Parakeets squawking and chasing each other above the human visitors below.

These tropical birds must have great views of the meandering paths, the glistening pond, intricate bandstand and outdoor cafes.

At each view I stop, look and photograph – memory postcards to take back home.

My flight back is to London so I take advantage of a day there before returning to Cardiff. Icy wind and flakes of snow greet me in North London as I walk through Waterlow Park in Highgate. Estrella park was opened in 1873 and apparently featured a real live lion kept in a cage for over 70 years for the benefit of visitors. . Waterlow park – opened in 1889 leads to Highgate cemetery where sleeping above George Wombwell’s grave is Nero the lion who was in George’s travelling menagerie. The Wombwell family are still involved in the circus business.


Lions weren’t a feature In Victoria park in Cardiff (opened in 1897) but it did have a zoo and animals such as monkeys, a polar bear, antelope and exotic birds. Andy and Anne Bell’s website list all the animals known to have been kept in Victoria Zoo – Cardiff parks

The nearest I got to wildlife in cold Waterlow park was two little moorhens who timidly tiptoed up to me in the hope of food. Even they looked a bit shivery.

On the tree trail around the park are some bee favourites such as indian bean, walnut, strawberry and Alder : Trees of Waterlow Park

In our sheltered garden our bees have been active over the winter months collecting some early pollen.

I am one of the 20 per cent of people allergic to tree pollen and the Alder tree is amongst the early pollen producing trees that can cause an allergic reaction. Alder trees are monoecious – both male and female flowers appear on the same tree.
There are yellow male catkins and brown female cones on the Wales champion (2013) Italian alder in Roathmill park and on others along the bank at Roath recreation ground.

To the bees, Pollen is considered to be ‘ bread’ – high in starch and a great carb/high energy food source for baby bees..
My hay-fever-like symptoms (itchy eyes) usually occur anytime between now to May depending on how early Spring is and the amount of pollen released so I am on standby but have been taking a teaspoon of our spring honey every day trying to build up my immunity as local honey contains grains of pollen from the various plants – invaluable and why we have a waiting list..
Forager bees decide in advance if they are leaving the hive to collect nectar to make into honey or pollen to store up for development when they leave the hive. They return with the pollen on their legs like shopping bags. They give it to the housekeeper bees when they return home who put away in their cell-like cupboards. This is a frame of store honey and pollen in a frame from our hive. The yellows, greens and oranges are the pollen. The dark shiny cells are full of nectar/honey. The varied pollen colours reflect the different trees, shrubs and flowers they comes from.

Soon, the baby bees will emerge and the colony will develop. There are around 5000 bees in the hive at the moment. In Summer that will increase to 50,000 bees. Roll on Summer….