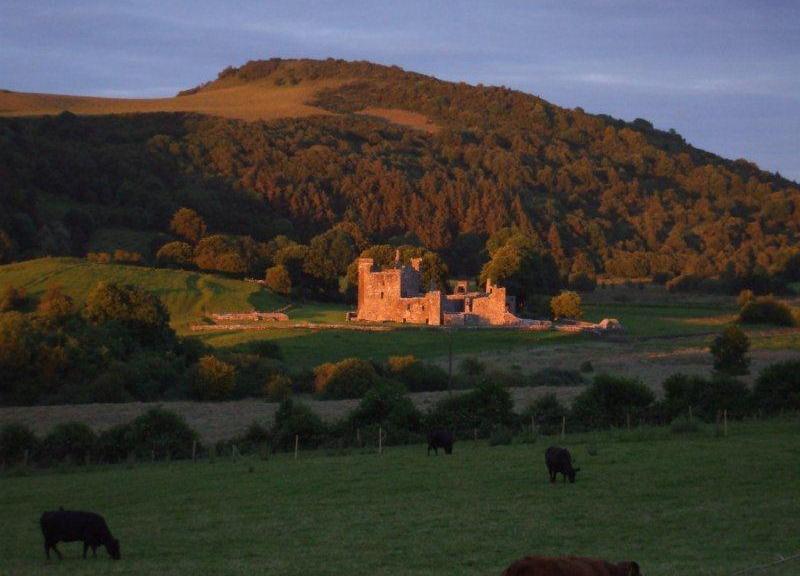 It’s coming to the end of May and our bees are at their busiest bringing in nectar and pollen from the surrounding urban gardens and up to three miles away from Roath botanic gardens and the nearby allotments at Colchester Avenue.

I think back to early Spring and the glorious tones of lilac heather I walked past at the entrance to the National Trust’s Dyffryn gardens back in early March.

The flowering winter heather (erica varieties) together with the primrose, snowdrops and chinodoxa dotted amongst the rockeries at Dyffryn signal the beginning of Spring and coax the hibernating honey bees out of their winter hives to start foraging for nectar and pollen. It is amazing to think that honey bees will visit a million flowers just to make a pound of honey.
The taste of honey varies according to the types of flowers the bees visit and it this is reflected in the colour of the honey too. If the bees have been collecting from horse chestnut trees, the honey can be dark. So too is the Ling summer heather honey very dark – and an acquired taste. Our honey tends to have a lot of clover and fruit tree pollen in it so is quite light in colour.

White, yellow and violet blue are bees’ favourite colours – and it is interesting to know that bees see the primary colours of red, blue and green as ultraviolet light, blue and green. They don’t see the colour red at all – just tones of red – oranges and yellows.. I have just started a course in watercolour painting and so I am beginning to appreciate more the varying tones, shades and theory of colour!

I spent most of early Spring – March and April – in County Westmeath in Ireland – and so watched the budding and flowering of some of my favourite fruits – damson, sloe and gooseberry.

I made sure I made a note of where the sloes were in flower in the area as when I return in Autumn it will be easy pickings for potent sloe wine and I can put to good use my grand collection of jam jars, kindly donated by friends. Damson jam is one of my favourites and although you need a lot of patience to pick out the stones as they float up amidst the bubbling purple in the pan as it reaches setting point, it is well worth the effort.

Although we don’t have bees on the Irish land ( we intend to) yet we have some lovely trees by the side of Lough Lene including a favourite outstretched beech which provides a warm welcome to all who visit at the gate. When we arrived the last of its prickly nut shells (which did contain mast) were still clinging onto its branches but day by day the new buds began to appear. It was fascinating watching the Magpies to-ing and fro-ing to their nest built at the very top of the tree which was easy to see without the leaves masking it. At dusk bats would swoop in circles above its branches and above the still waters of the lake.

Although getting on in age – maybe a hundred years or so – our beech can’t compete with the specimen marked as ‘ the oldest in our valley’ on the nearby circular walk around Fore abbey which is just over the hill. 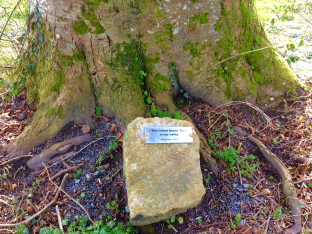 Oldest beech on left
And not far from Fore is one of the largest planted beech woods in Ireland – the thousand acre Mullaghmeen. Beech forests are often referred to as ‘natures cathedrals’ which does aptly describes the magnificent canopy of this forest which provides welcome shelter for the all too frequent Irish wet weather.

It is said that a row of beech trees were planted at the local Tullynally castle specifically to block the view of the distant hill where hanging took place in Fore. You pass ‘hangman’s hill’ on the circular walk around Fore (where the old beech tree is) and at the end of the walk you reach the ruined gaol from where the guilty men spent their last hours. It is next door to my favourite pub of all time – the Seven Wonders Bar.

The pub’s name reflects the seven wonders – or miracles – that Saint Feichin, the local saint who founded Fore abbey in the 7th century – and whose name is given to the local primary school and parish church – is said to have performed.

The first miracle is the Spring that came gushing up from the earth when St Feichin struck the parched ground with his crozier and this spring was then able to feed the mill – ‘the mill without a race’.
He (2) built the monastery upon this marshy ground – or bog and (3) the underground flow of water here appeared to flow uphill to the Mill and past (4) the Ash tree – shaped like the Trinity with its’ three branches – that wouldn’t burn ( surviving terrible fires that occurred at the abbey).
The final three miracles listed are – (5) The water that doesn’t boil – (the water within St. Fechin’s well), (6) the anchorite in a cell – the hermits who occupied the anchorite’s cell and finally (7) the huge lintel-stone above the doorway of the ruined church opposite the abbey – raised by St. Fechin’s prayers alone.

It is worth a pint of guinness ( the best in Ireland) to toast such a hard working Saint.
.